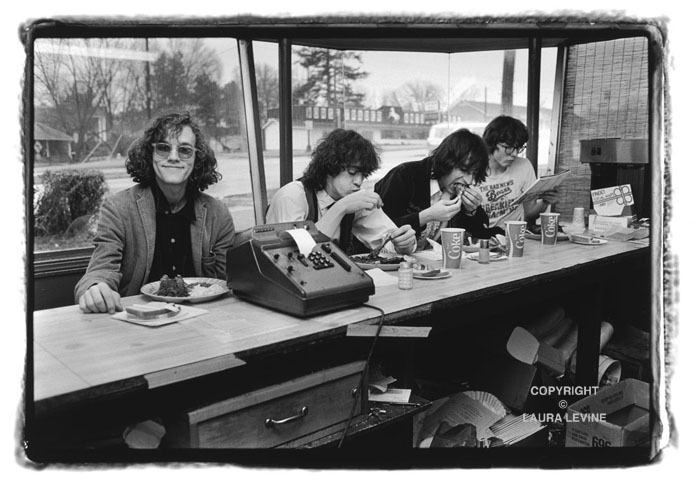 Here's a snappy little interview I just did in advance of the Brooklyn Museum exhibition/Knopf book curated and edited by Gail Buckland, entitled "Who Shot Rock and Roll: A Photographic History 1955 to the Present." The Brooklyn show opens October 30, and  I'll be posting more about it as it nears, but meantime here's a little behind-the-scenes interview I did with Sara Rosen about one of my photographs in the exhibition/book.


Laura Levine is a visual artist who has pursued a variety of projects in independent filmmaking, photography, television animation, fine art and illustration. Her work has recently been included in the Backstage Pass: Rock and Roll Photography exhibition at the Portland Museum of Art, and is in the permanent collection of the Rock & Roll Hall of Fame and Museum. Her work has appeared in magazines such as Rolling Stone, The New York Rocker and Sounds UK. Levine’s paintings and photographs have been exhibited worldwide at the Museum of International Folk Art in Santa Fe, The House of Blues, and the Galleria Comunale d’Arte Moderna e Contemporanea in Rome, the Museum of American Illustration and the Rock & Roll Hall of Fame and Museum.

How did you first get into photography and what attracted you to rock and roll as a subject?

Laura Levine: Seeing a Diane Arbus exhibit at MOMA when I was fourteen pretty much changed my life. I left the museum thinking, “I want to do that.” I was initially drawn to documentary photography and photojournalism, and in fact that’s what I thought I’d end up doing.

Although I was born in Brooklyn, I grew up in New York’s Chinatown/Lower East Side, where I started out doing mostly street photography in the 70s. In college I was the photo editor of the Harvard Crimson and when I was twenty I did a summer photography internship at the Washington Post. After graduation I interned at the Village Voice. I’d always loved rock and roll, of course, and slowly but surely I began to focus more on music, shooting bands onstage and backstage at clubs. I eventually ended up as the chief photographer and photo editor of the New York Rocker in the early 80s and by then had decided to focus exclusively on music portraiture.

In the book, Gail Buckland mentions that you were friends with R.E.M. How did you come to connect with them?

I met R.E.M. when I was assigned to shoot them in 1982. We’d already known of each other through mutual friends in the indie music world. They came over to my apartment in Chinatown and it was simply one of those magical sessions that happen now and then where we instantly hit it off.  After the shoot we went out for dinner to a Chinese restaurant and the rest, as they say, is history. I ended up not only becoming good friends with them and going on the road with them countless times, but made a film with them and my other musician friends in Athens called Just Like a Movie.

What were your experiences like touring with them R.E.M. in the early days?

Touring with R.E.M. was an adventure. When they first started out playing clubs they traveled in a van. Everyone crammed into the van together and the guys and their manager would take turns driving. We stayed in seedy motels—sometimes four to a room—and I had a blast. But I’m glad I didn’t have to do it for more than a week at a time—I would have gone mad! But for short excursions here and there it was great fun. Once the band started playing larger venues, they moved up to a tour bus and driver, which was much more elegant.  I was backstage with them the first time they appeared on the David Letterman show, onstage with them the first time they played a big arena (as an opening act), at record-signings, their homes, etc. They included me in everything, with total access, and of course I had my camera with me at all times. Michael Stipe and I also did a lot of photo sessions on our own, experimenting with lighting, photography and portraiture and collaborating in the truest sense of the word.

How would you describe the music scene back then? What was it like to be a photographer at this time?

I’m so thankful that I was shooting bands at that time. For one, this was before digital photography, so everything I shot has been preserved on film. Secondly, I was able to do my work before the music industry changed to the point where style seemed to take precedence over substance…before the rise of the celebrity culture. As time went on, labels and management began to tightly control access to their artists and insisted on photo approval. As hair, makeup and styling played a bigger role, music photography became more akin to fashion photography. That’s when I started to get out.  Lastly, the music was incredible. This is not to say that there still aren’t amazing images and music being made today, but it was less self-conscious back then.

In the days before the Internet and digital photography, when content was seemingly limited to those with access, the creation of images played a massive role in the music. How does your work contribute to this archive?

I’d like to think that people appreciate my photographs not only as intimate glimpses into the lives and personalities of the musicians they admire, but also as works of fine art which stand up on their own as portraits no matter who the subject was. As a photographer, my goal was to somehow make a personal connection with my subject, and share what I saw with the viewer. I tried to bring my feelings about my subjects —admiration, love, humor, respect —to my photos, so people could see what I saw in them.